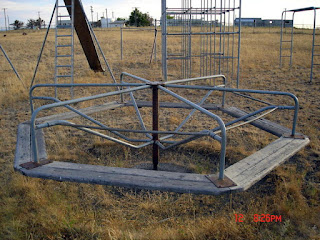 The Rocket Launcher
I did walk to school uphill both ways because there was a hill between our farm and the one-room one-teacher schoolhouse I attended. But that was nothin’. I wanted to go to school an’ not for the bag lunch or Roseanne or even for the learnin'. It was the Rocket Launcher.
I was one of the little kids, small and light and not bright. Perfect rocket material. The sixth graders, they were the ones, they were the fuel and they were the brains and in our school, the muscle. All morning we boys would sit and stew, fantasying about recess and keeping an eye out for Mrs. Wells in case she asked us to learn something. We wanted to learn about trajectory and pressure upon impact and- “Yes, Mrs. Wells, I will read the next chapter of Dick and Jane rolling down a hill.”
Rabbits! I don’t give a Scooby doobie if Dick and Jane rolled down a hill unless they were within range of The Rocket launcher.
And then each day it would, for the great God of Heaven, it came time to release the suppressed and sprint for the playground! The big kids would remove any girls that might be playing on the Merry-go-Round- Um, I mean the Rocket Launcher. The big kids would sit on the boards with their feet in the center and begin to wind the Rocket Launcher up. Me and the rest of the stunted would crouch on the boards on our feet and hook our arms over the pipes as the turbines wound up and the Rocket Launcher spun.
The big kids began to chant and the world blurred. Forces began to pull on my shoulders and I had to hook my toes to stay on board. The turbines hit top-end pushing with their feet and yelling Army noises. My hair sucked outward and my head began to bend toward the g-force.
I unhooked my arms, and gripped the pipe with both hands and released my toes. Instantly,  I snapped straight out, hanging on with my hands, whipping around and around knowing Mrs. Wells was inside trying to recover from the little rotten minions’ that she herded each day. We were free to launch.
Pretty Patty Dunbar was in range, she, talking with Roseanne, was unaware of her blundered path. I locked on. I went around once, twice. The pull on my eyeballs made the target blurry. I went around again. Stay on target. Patty stopped and turned. Stay on target. My fingers were stretching and my shoes were slipping off my gripping toes. Stay on target.
Once, twice around, I had target lock. Around we came and the world slowed as my brain did the calculation. The turbines on the Rocket launcher screamed “Go for Launch!” I released and screamed at a hundred miles an hour toward the enemy. Spread-eagled and wide-eyed, I pulled the pin on this grenade and readied for impact. I crashed into the ground, dirt flew and grass stains forever penetrated my pants right between Pretty Patty Dunbar and Roseanne.
Rats. Missed. They looked at me with girl disgust. Mrs. Wells stood on the steps ringing the bell in her hand. Double rats. I got up and limped toward the schoolhouse with grass in my hair and ripped sleeves. Climbing the steps, Mrs. Wells asked, “What on earth happened to you?” “Nothin’.”
Posted by Spike at 5:06 PM