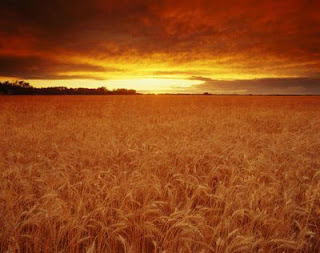 Russell the runner;
I went to a one-room school for the first three years of my formal education. That is, the part of education where classrooms are involved.

Our teacher, Mrs. Wells, sometimes needed an entire village of kids to raise an education in us. And Russell was why. He was one of the older kids among the 30 or so farm kids from k to 6th grade. Whenever Mrs. Wells yelled at Russell, which was a lot, he argued back.

While Russell was losing this discussion with Mrs. Wells, We would be sitting in our desks, whispering, “run- Russell –run”. And when he broke for freedom, out the door and across the field of oats in the splendid sunshine he would race; which is what we lived for.

Mrs. Wells would shout, “Go get Him!” and the entire class would roar out of the classroom, four kids trying to fit through the door at the same time. I, being one of the little kids would cannonball into the clog and bust it out. And we would run and run free as wild stallions, flying with the songbirds and we would catch Russell, and grab his arms and his collar and his pockets, all putting a hand on him, and bring him back. And it was Glorious! And ole man Fox, the farmer next to the school, never could get a good crop off that field.